The present Missouri State Capitol is the third permanent structure to serve as the seat of state government in Jefferson City, and the sixth capitol in the state’s history.  The first capitol in Jefferson City was built in the period of 1823-1826 and was destroyed by fire in 1837. A second capitol was completed in 1840, but also burned when the dome was struck by lightning on the evening of Feb. 5, 1911. The ground-breaking for the present capitol occurred on May 6, 1913, after the state’s voters overwhelmingly approved a bond issue to determine its location and finance its construction. The building was completed in 1917, and officially dedicated on Oct. 6, 1924.

Although the new capitol would remain in the same city and on the same site as its predecessor, its designers envisioned something more than what was.  Inspired during the period known as the American Renaissance—a time of political and cultural activity influenced by Greek and Roman classicism, the new capitol was to be bigger, better, bolder—truly a testament to the idealism that marked early 20th century American democracy.

As such, the structure is a classical design of symmetry and elegance, and is one of the last statehouses constructed in the Roman renaissance style.  Covering nearly three acres, it stands upon 285 concrete piers which extend to solid rock at depths from 20 to 50 feet.   In keeping with the directive to construct a “Missouri-made” building, the exterior is of Carthage, Missouri limestone marble, as are the floors of all the corridors, the rotundas and the treads of the stairways.

The grand staircase is one of the capitol’s outstanding features. It is 30 feet wide and extends from the front portico to the third floor.  At the entrance is a set of mammoth bronze doors, 13 feet by 18 feet.

Atop the lantern of the capitol dome, 260 feet above the ground, is a classic bronze figure of Ceres, goddess of grain, chosen to symbolize the state’s great agricultural heritage.

Inside the building, the view of the dome from the first floor rotunda is magnificent. A huge bronze chandelier, weighing 9,000 pounds, hangs from the dome’s eye, 171 feet above. The paintings of Frank Brangwyn on the eye, panels and pendentive of the dome are visible from the ground floor. Art throughout the building vividly depicts scenes of Missouri’s history, countryside and people. The dramatic murals by artist Thomas Hart Benton in the House Lounge are one of the most famous attractions. The Missouri State Museum on the ground floor is another popular feature.  The surrounding grounds outside the building are graced with majestic memorials and fountains dedicated to the arts, sciences, and heroic citizens of Missouri.

Excerpts sourced from the Missouri Secretary of State 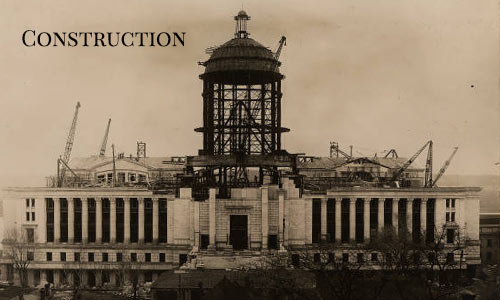 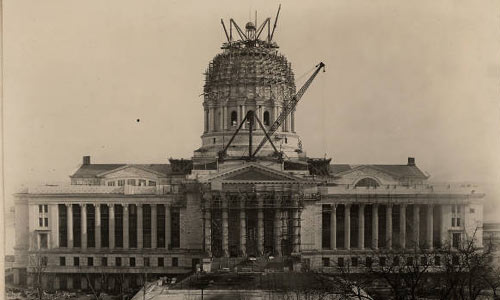 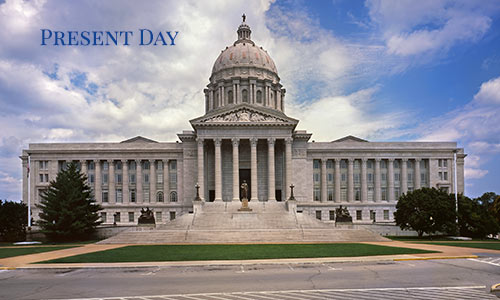